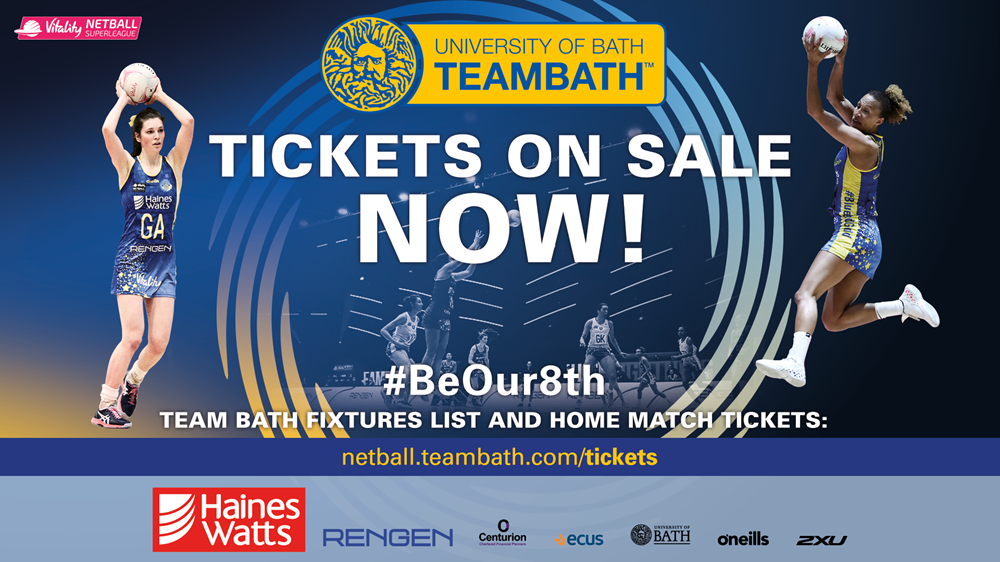 The competition is reverting to a home and away format for the new campaign and season and individual match-day tickets are now on sale for the first Superleague fixtures to be played at the Team Bath Sports Training Village since March 2020.

Home fans will have their first chance to cheer on the Haines Watts-sponsored Blue & Gold when Surrey Storm visit the Team Bath Arena on Friday 18th February (7.30pm centre-pass).

There are three massive games to look forward to during March as Team Bath take on 2021 semi-finalists Manchester Thunder, defending champions Loughborough Lightning and old rivals Saracens Mavericks in front of their home crowd.

Team Bath, who are also supported by Rengen, will also entertain London Pulse, local rivals Severn Stars, Celtic Dragons and Wasps, with many of the home games being preceded by NPL U21/U19 fixtures or matches involving the Knights Men’s team to provide spectators with twice as much netball action to enjoy.

Should Team Bath finish in the top two, they would also have a home match in the semi-finals on Friday 3rd June. The Grand Final and third-placed play-off will then take place at London’s Copper Box Arena on Sunday 5th June.

Team Bath and England star Sophie Drakeford-Lewis said: “It’s been a long time since we got to play in front of a home crowd and we can’t wait to get back into the Team Bath Arena. We have such brilliant fans and they certainly get us across the line in some of those close games. To have them back after so long is going to be really special.”

The Blue & Gold, who finished runners-up in the 2021 Superleague and won the British Fast5 All-Stars Championship last weekend, begin their campaign with a Season Opener double-header at Resorts World Birmingham where they face Strathclyde Sirens on Saturday 5th February and London Pulse the following day.

They will be back at the central venue, along with their fellow Superleague clubs, on Easter Sunday (17th April) to face Leeds Rhinos.

Visit netball.teambath.com/tickets to purchase and for more information.

Superleague matches at the Team Bath Arena in 2022

* Time given is centre-pass for the Superleague match, curtain-raiser start times TBC.